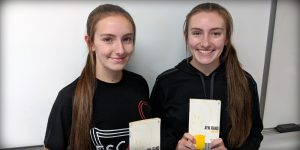 Two Chadwick students were selected as semi-finalists in a national essay contest sponsored by the Ayn Rand Institute.

Twin sisters Kayla and Kylie Purdome wrote the essays last year as freshmen in Mr. Tyler Walker’s English I class and submitted them online. The winners were not announced until this summer.

The contest is one of the largest of its kind, giving away $4500 in cash prizes and collecting more than 10,000 entries annually. While they did not win any money, they did place in the top 2 percent of all submissions.